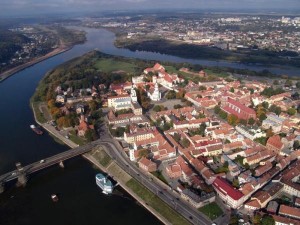 The International Study of Religion in Eastern and Central Europe Association (ISORECEA) in cooperation with the Vytautas Magnus University and the Lithuanian Society for the Study of Religions is organizing a conference “RELIGIOUS DIVERSIFICATION WORLDWIDE AND IN CENTRAL AND EASTERN EUROPE”.

For a long time the secularization thesis dominated the field of studies of religions in contemporary societies. Many definitions and even more explanations of the process of secularization in contemporary societies led scholars of religions to search for new theoretical insights about the rapidly changing global social situation. Opponents of this paradigm claim that we are witnessing growing religious vitality at religious market or change in religion itself – here we find the privatization thesis, precarious religion or religious bricolage. Independently of how we approach it from theoretical perspective religious diversification is the process that is evident in the majority of contemporary societies. It is manifested through numerous religious traditions and new emerging religious communities not only within the religious traditions, but also at the individual level, as well as by the increasing number of non-believers and non-adherents, etc.

In many cases Central and Eastern European societies have been analyzed as places where the monopoly of scientific atheism was replaced by the monopolies of national churches. But after more than twenty years of the post-communist period, religious diversification processes within these societies is visibly emerging, despite the fact that the dominance of the so-called national churches is still obvious.

We would like to approach these questions in the forthcoming international conference and to encourage scholars from various parts of the world to share their theoretical and empirical insights about religious diversification.

In this conference we also invite discussion of the following topics:

Read more about the conference and participation fees – download a call for papers for the ISORECEA 2014 conference (PDF file).

The International Study of Religion in Eastern and Central Europe Association (ISORECEA) is an international scientific association established in December 1995, after a series of conferences organized since 1991 and devoted to the religious change in Central and Eastern Europe. The association focuses on the exchange of academic knowledge on the situation of religion in the Central-Eastern European area. Its members represent various disciplines, e.g. sociology, anthropology, history, philosophy, and come from various countries, including Belarus, Belgium, Bulgaria, Croatia, the Czech Republic, Denmark, Finland, France, Great Britain, Hungary, Lithuania, Poland, Russia, Slovenia, Ukraine, and the USA.